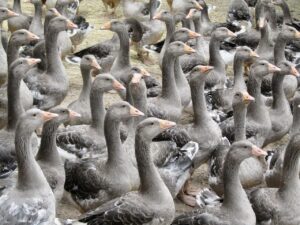 In America, thieves prey on banks or jewelry stores, but in France, especially during the Holidays season, they have more important priorities.  They target foie gras, a delicacy without which the French could not decently enjoy their traditional reveillon.

“Resisting a beautiful chocolate cake or a wonderful foie gras is as difficult as (the idea of) saying no to Paul Newman.” Diane von Furstenberg

It has been so bad, that the police have been mandated to patrol the areas (especially Dordogne) where the foie gras is produced and sold. In the eyes of the French, stealing truffles, oysters, or foie gras is a capital sin equal superior to gluttony, sloth, envy, wrath, lust, pride, and greed all put together.

While Americans are most concerned about trivial matters such as the cost of health care, violent crime, gun violence, climate change, and illegal immigration, the French right now fret mainly about vacations (winter and summer) and foie gras. To each their own.

But is foie gras ethical? I think not and I could easily do without it. The gavage of geese is cruel and inhuman, and in many countries such as Austria, Croatia, the Czech Republic, Denmark, Finland, Germany, Italy, Luxembourg, Norway, and Poland, or following interpretation of general animal protection laws in Ireland, the Netherlands, Sweden, Switzerland, Turkey, and the United Kingdom have banned its production.

Foie gras production has been outlawed in the state of California and New York City, but it remains legal all over the US.

Do all French crave foie gras? No, especially the younger generation more concerned with the environment and animal rights.

“Late in 2003, the French group Stopgavage (“Citizens’ Initiative for the banning of force-feeding”) published the Proclamation for the Abolition of Force Feeding, which asks justices to find foie gras production practices a violation of existing animal welfare laws. For this manifesto, Stopgavage claims the support of over eighty French animal rights and welfare associations, over a hundred such associations from 25 other countries, and over 20 thousand individual signatories.” Wikipedia

Personally, I say the heck with the foie gras and the bûche de Noël. I love animals and I am plump enough. Instead of Fat Liver, I will celebrate with oysters and some other non-cruel delicacies. I have never heard oysters scream when I open them, and that’s good enough for me.

Merry Christmas and Happy New Year to all.